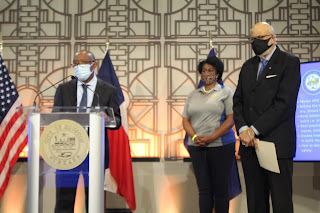 HOUSTON - Today, Mayor Sylvester Turner appointed 45 members to his Task Force on Policing Reform to explore best practices and procedures in operating the Houston Police Department.
A complete list of members is here.
The task force will make recommendations in training, use of force, police oversight, and interactions with the community. The official charge of the Mayor's Task Force on Policing Reform is to:

"It's a tall order. It's certainly important that people get an opportunity to express their thoughts, provide their opinions, and I know that we will get many. I think, in the end, this will help our city move forward in a very productive fashion," said Mayor Turner. "Over the past several weeks, we have all listened to a call for police reform and the demand for change. People in our community want good policing, accountability, and transparency within the Houston Police Department."

Currently, Mr. Payne is the Director of Strategic Partnerships, Civic Engagement, and Critical Conversations for the Houston Public Library.

The Mayor's Task Force on Policing Reform will meet for the first time during the week of July 6 and have up to 90 days to submit its recommendations.